John Burton grew up on a farm in Saskatchewan, studied at the University of Saskatchewan and the London School of Economics, was elected to Parliament, and played a major role in Saskatchewan's 1975 decision to acquire potash-producing facilities. He was a member of the Board of Directors of the Crown-owned Potash Corporation of Saskatchewan from 1975 to 1982. 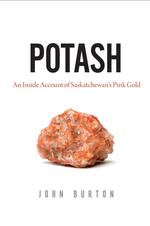