Ian Mosby is an award-winning historian of food and nutrition who was, alongside Evan Fraser, named one of the “53 Most Influential People in Canadian Food” by the Globe and Mail in 2016. His book Food Will Win the War: The Politics, Culture, and Science of Food on Canada’s Home Front was shortlisted for the 2016 Canada Prize and won the Canadian Historical Association's 2015 Book Prize. He is an assistant professor of history at Ryerson University in Toronto. 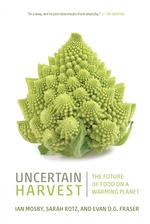