Bevann Fox is a member of Pasqua First Nation, originally from Piapot First Nation. In 2012 she received her Bachelor of Arts in Arts and Culture and in 2018 her Master in Business Administration, Leadership from the University of Regina. In 2014 she was honoured with the YWCA Women of Distinction Award—Arts, Culture and Heritage. She received an Indigenous Voices Award for Genocidal Love, which was also honoured with two Saskatchewan Book Awards. 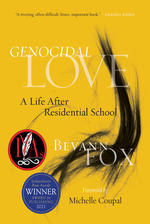