Join us for a poetry break – courtesy of a reading by Randy Lundy, from his 2020 collection Field Notes for the Self

A KIND OF CEREMONY

orange from fresh-cut fields east of town, geese settled into the evening

stubble, stomachs filled with fallen seed, a pack of coyotes stalking in the

leading you directly toward that hand-drum climbing above the horizon

west run of the rail tracks glinting in the light.

You are tempted to call your walking ceremony.

Ancestral memory in your feet and thighs: in blood, bone, and marrow.

Your heart is a muscle-lodge, animal-alive with its murmured prayers.

four of them, passed from hand to hand, from lip to lip. The wrinkled

this path. All this inside you: what your body knows before your mind.

it down, three dogs asleep at your feet, you are alone except for their

breathing and your own. Whose face is that lit, skeletal reflection in each

of a crow’s wings? Take a seat and all your dead come to sit with you,

hungry ghosts; their moans rise from the fire as split birch empties itself

the Suttanipata. Toss tobacco into the flames.

Think of the monk who takes off his shoes in the temple’s doorway,

enters, and returns to put back on his shoes. He repeats this, again and

again, each minute from dusk until dawn: take the shoes off; put the

Field Notes for the Self is a series of dark meditations: spiritual exercises in which the poem becomes a forensics of the soul. The poems converse with Patrick Lane, John Thompson, and Charles Wright, but their closest cousins may be Arvo Pärt’s tintinnabulations—overlapping structures in which notes or images are rung slowly and repeatedly like bells. The goal is freedom from illusion, freedom from memory, from “the same old stories” of Lundy’s violent past; and freedom, too, from the unreachable memories of the violence done to his Indigenous ancestors, which, Lundy tells us, seem to haunt his cellular biology. Rooted in exquisitely modulated observations of the natural world, the singular achievement of these poems is mind itself, suspended before interior vision like a bit of crystal twisting in the light.

Learn more about the book here. 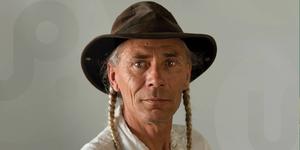 Celebrating the Life and Work of Harold R. Johnson